My wonderful Thorman (not his real name) turned 4 this weekend!! I made him a cake, got him a bow tie and a party hat and had him and Loki have a doggy tea party. Well actually I just made them sit looking handsome so I could take some cute pics!!

Every year I’ve done something for it. One year we had a birthday party in the shop I use to own and invited all the local dogs. Thor met his brother!! It was so difficult to tell them apart. I know labs generically look the same from a far but up close they’re all so different unless from the same litter. See if you can see which is Thor and which is yogi…… 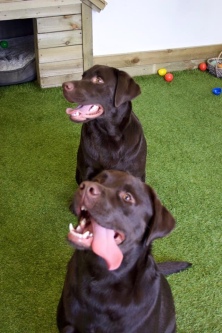 I can’t believe it, those 4 years have gone by so fast and so much has changed. I’ve moved 3 times, got engaged, lost friends, started a business, had 2 new jobs, bought a house, got a second dog, made new friends, broke off the engagement and separated, gave the business away, lived on my own, got a promotion and started back at uni. And there’s more in between that too!!! And Thor has been there for ever step of it. A grumpy old man disguised in a loving Labrador outfit.

He is the most chilled dog there is. Just calm and patient. He lets me dress him up, he listens to my crappy singing, he poses for photos the list is endless.

I use to suffer really bad from nightmares/night terrors and I could never wake myself up from them. They were awful. And if I did manage to wake up I fell back to sleep in the bit where I’d woken up from!! Proper shit. Somehow Thor knows when I use to have bad nights and be down stairs barking to wake me up. He never sleeps in my room of a week night (only on the night before I change the duvet covers for washing) and he use to sit outside my door and whimper if I was having a nightmare. In the worse phase of it I did let him sleep with me and they never happened when he was around and if they started he knew somehow that they were and woke me before it got to bad.

this is him 12 months apart sat in the same seat….

I sit and talk to him and Loki (yip crazy dog lady) and they just look at my puzzled. They must be thinking “does she know we don’t have a clue what she’s on about???” They know all my worries and secrets. They sit with me when I’m crying and just look at me and cuddle closer. When I’m laughing they’re bouncing around with me. When I’m singing and dancing around the house they join in.

They mean the much to me they’re tattooed on my leg. Thor with a top hat and monocle and Loki with a bowler hat and a cigar (because who doesn’t love dogs in hats!!??)

I have suffered with depression and anxiety and in my worse darkest time it was Thor that helped me. Who would look after him if I wasn’t there and he wouldn’t know or understand where I was if I was gone. The thought of my wonderful Thorman looking for me, missing me and not knowing what was going on was the bit that made me ask for help.

Labradors have a wonderful unconditional love for the people they care about and they’re loyal and they’d do anything for food. enthusiastic about life, happy to see certain people when they appear. Happy after being fed. Likes going out and exercising. Likes food. Clever. Will eat anything. Cute. Actually, wait, I think I may have just described myself there actually. They do say owners start morphing into their dogs….

My life is a little better with my two favourite dogs in it. As much as they drive me crazy I wouldn’t be without either of them!!

I often wonder what the boys have called me…..I wish I could speak dog when Thor starts barking at me. he’s probably saying “oi, Ethel, stop taking pictures of us! And feed us!!” 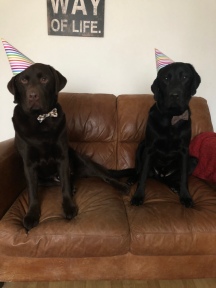 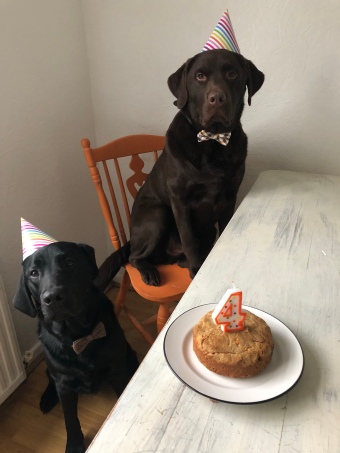