I’ve been making the most of this heatwave and working on my hovel of a garden.

Let me set the scene for you…. about 2 years ago when I was with my ex he wanted to build a man cave. I was happy for this to happen. However he wanted to create an under ground bunker. We had several conversations about how this wasn’t practical and it would be better if he build one on top of the existing paving that was there. Unfortunately for me I wasn’t aware that all those conversations we’d had were ignored

So one day I went to work and came home to find he had decided to get a digger man in, hire a skip and dig up the back end of my garden to start building his underground bunker. However what he did too was leave a pile of rubble/mud there which was about 6m long, 3m wide and it was higher than my waist.

you can’t really see how big it is on this picture. 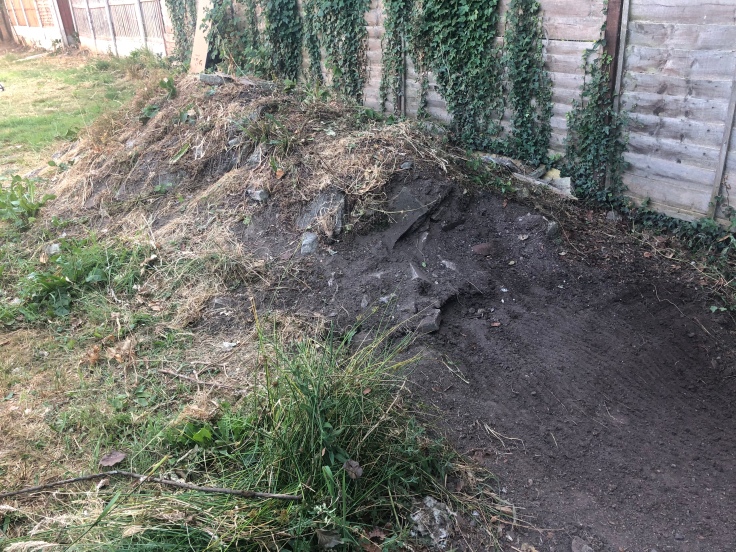 Needless to say there were a few choice words and I was less than happy.

Unfortunately for me this wasn’t he last time I went to work to find something else dig up in my garden. I came home one time to find all the flags dug up near the house to find a drain, a drain. For an extension. That we hadn’t even discussed. That he’d had plans drawn up for. That I knew nothing about!!!! Honestly. Again not happy. Thor bloody loved it though because of the clay soil it filled up and he had his own little pool. A very muddy pool. But a pool none the less. He was a very happy dog and I had a very muddy kitchen.

I also came once to find he’d built a shelter for his tools (after we’d split up) however I used that to my advantage and thought “ooo outside bar when he leaves….” got him to put plastic see-thru roof on it and hopefully in the next few months I’ll have my outside bar…. so I won’t moan about that one.

Anyway back to the garden…. I had this huge pile of shite I’ve been staring at for 2 years wondering what to do with it and it’s just been there growing grass over it and being an eye sore. And then the other week on the way to work when I was calculating how much a skip would be and how fun it would be to drive a digger (I do love tractors) it just came to me…. why don’t I just put it back to where it came from!!!??!???

So armed with only a spade and a bucket I started to dig! I did think the dogs might help but they didn’t. They just stood everywhere I tried to dig and everywhere I was chucking the dirt. At one point Thor got a whole spade full in the face and just carried on standing there!! 🤦🏻‍♀️

In that pile of soil not only have I found soil and slabs I’ve found wellies, Stanley knives, hack saws, rubble bags, water bottles, wood, rusty RSJs, metal rods, an outside brush and plastic toys. Seriously though is it all builders that do that and hide their rubbish like squirrels hide nuts or just this one…..

As well as that I’ve found so many frogs and toads!!! It was so hot at one point I was worried they’d all dry up (I don’t know how long frogs last in the sun) so I got the dogs paddling pool out some rocks in it and chased the little critters up and down the garden can picked them up because I wanted them to be safe from my chucking the slabs and the sun. I collected 5 frogs and toad. Went inside a for a drink and came out to check on them and the little ungrateful sods had all jumped ship (literally) and escaped. I stood there at one point thinking I wonder how many other people would save the frogs and toads they keep evicting??

For the past 10 days I’ve worked on it every evening for about 4 hours (had to make sure I stopped for Love island) and I’ve got up early of a weekend until it was to hot to dig and then carried on when it’s cooled down. I’m not sure I’d of passed the H&S test on a building site wearing my converse, short shorts and bikini while carrying concrete slabs up and down my garden and dragging a bucket full of mud back and too but I’ve managed to get a good tan from it.

It’s not perfect by any stretch of the imagination but considering it’s been just me on a budget of only a bucket and a spade it looks a million times better than it did.

Looking forward to doing a proper job on my garden patio now….. 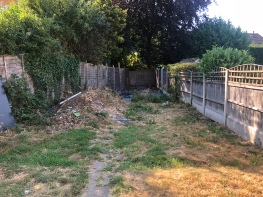 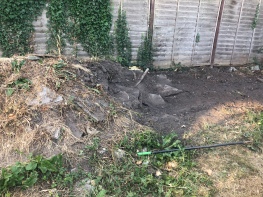 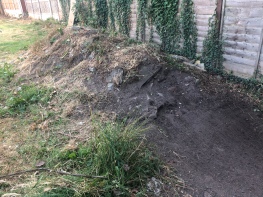 Not much of a dint 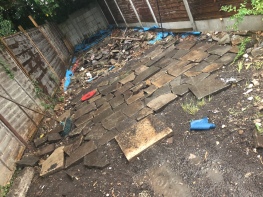