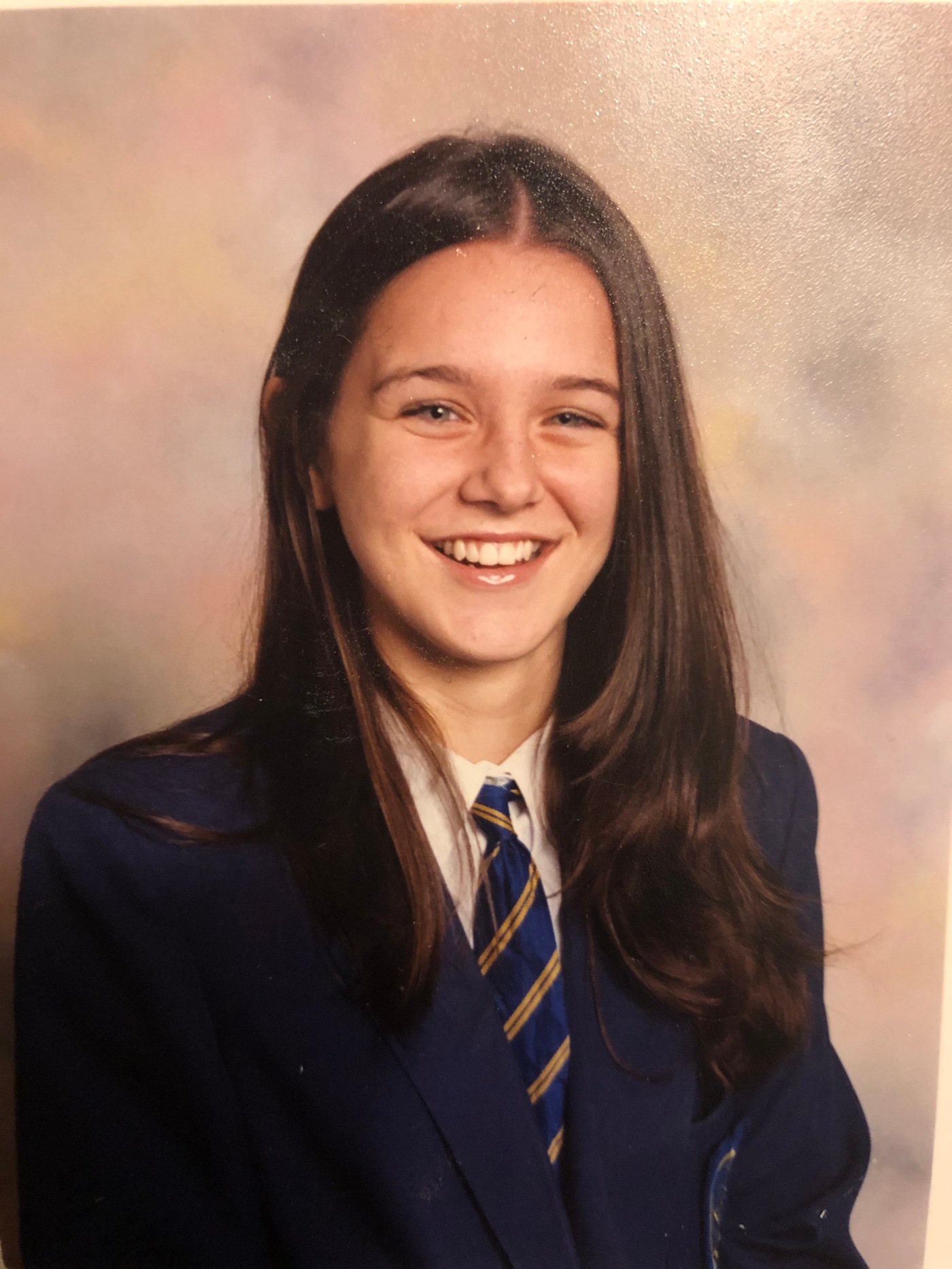 Oh Whats occurring? (that tv show hasn’t come out yet for you but you’ll know it when you hear it)

Ive been thinking a lot about the you were younger and I just wanted to let you know that you’re doing just fine, you’ve got a good job, two beautiful dogs, your own house and some amazing friends. Its not been easy though, its been a bit rough but you survived. You’ve survived everything thats been chucked at you. I thought if I could help you out a bit then I’d just write you a letter with some pointers and who better to give yourself advice than you 15 years in the past??

Firstly 34 is NOT a grown up age!! I know you’re thinking being over 30 is well old and grown up but its not. its really not!!!! Honestly, you are having much more fun now your 34 than you were at 24 or even 19. This is because you have money. You have your own money. You’re not rich but you do ok. Also actually speaking of money you were pretty shit with it for a while. This is the first bit of advice be more careful with money, you aren’t a baller (You forget this when you’re drunk).

You’re going to dye your hair black because you’ll go through a bit of an alternative stage, you won’t be quite a goth or an emo but you’ll end up being a bit of typical art student. When you decide you don’t want black hair anymore DO NOT bleach it blonde yourself!!!! it doesn’t work out very well and you have to spend all day in the heiresses. to be fair from that point on you let hair dresses mess with your hair and you stop box dying it for a bit which I suppose is good. What you do do though is dye or cut your hair whenever you want “a change’. another piece of advice is that whilst you might suit a fringe there is no need to get one that starts from your crown. That mate it just too much fringe. Also you’ll love it for about 2 months and then you’ll want to grow it out but it just won’t grow. Fringes despite what you think at 15 are not for winter, you wear hats and have a greasy fod. Please think carefully about the fringe thing.

When you’re over 18 you will replace the hairstyles with tattoos’. Each time something happens in your life you get a tattoo, its saved your hair falling out because of home bleaching and self cutting so take that as a good thing!

I know currently you don’t have any fashion sense. And I hate to tell you this but you still don’t really have any as you get older, you just sorta grow into your own style that people just stop questioning. You will get a lot of comments through your life long the lines of “oh thats so you” or “oh thats very you” These are not negative. These are a fact. You wear stuff other people wouldn’t. Simples. You will still love colour and patterns, especially ones that clash and that never ever goes away. Leopard print, glitter and sequins are your Achilles heal, you’re like sodding magpie. You still don’t own much black clothes and you wear what you want when you want to. And mostly you look alright it in. You will grow to have an adverse feeling towards matching things, socks, underwear, clothes etc this too will never leave you. Even the idea of buying actual coord sets brings you out in a cold sweat.

You are a geek, you will always be a geek, but at some point in the future being a geek becomes cool so just ride it out. People actually wear glasses in the future with no lenses in them, you still have to wear them for actually seeing but least you have a reason.

Music just becomes more and more important to you as you get older, your tastes varies and you find a connection to it whether it be the lyrics or the sound of the music. Its your escape, its how you switch off. Remember what I said tho before; you can not sing!! So don’t try. just save that for the shower or the car. Do remember tho when you have a convertible that people can hear you at traffic lights so you might want sing quieter.

I know you feel different from everyone else and let me in on a secret; you are. It doesn’t do to be like everyone else though. You are strong, and brave, and funny and optimistic. You can’t dance (you will never be able to), you can’t sing (again stop those singing lessons waste of time). Sports and playing instruments is your thing, keep those going. it’ll keep you sane. You like to talk a lot and you think even more, you are also and empath (look it up) you are all to feel things around you and and get a sense for people without being able to understand why. Trust your gut. It hasn’t been wrong yet, its your heart thats let you down. You care. A lot. About everyone. This is possibly your greatest strength and your biggest weakness too. Unfortunately because you don’t have a clue you’re an empath emotional vampires will try and suck the goodness from you, these are known as narcissists. There have been a few of these, your gut knows but your heart ignores it. Please listen to the gut feeling, the force is strong in you young one, use the force.

Also whilst I remember as much as you may present as an extrovert (again ask Jeeves) you are not, you’re an introvert. You can be around large groups of people and be outgoing but you need alone time to recharge. You are not a loner, you are recharging.  Self care is not selfish, if you need to be on your own in your room practicing eye shadow that you’ve just bought from the market or arranging your wardrobe so it’s into styles and then colours do it. Just don’t get to obsessed, thats something else you do, that’ll be the scorpio in you though.

School was ok until last year, year 9 was a pretty rough year, being bullied and having to move forms was pretty wank really. I just have to let you know you still have no idea why that happened. Its just been one of those things you’ve just had to get over with no closure. Also as you go through your life you will be bullied in work places, its more subtle when they’re grown ups but its still just as shite. Don’t let them question who you are, just keep being you and being true. Don’t let the bastards grind you down. people will say its jealousy, don’t even listen to them, just stand up for yourself and don’t back down, they hate it when you do that.

You may not realise this now but you are an internally anxious person and when you get into year 11 you’ll start being sick for no reason and not being able to eat, the really annoying adult will think you have an eating disorder and you’ll be sent to see loads of people to find out why. Turns out what it is is stress, thats how your body will deal with stress. You aren’t a comfort eater, you’re a no eater. You’re a feeling sick when your anxiety kicks in person. it takes a good few years for you to figure that out so if you could just tell someone what’s causing you to feel this way and what’s going on when you start to feel like that someone will help. I promise. Firstly you’re not a lazy reviser you’re dyslexic. You won’t find out until your half way through uni and once you do it’ll all make sense, its one of the reasons your short term memory is so poor and one of the reasons you can’t tell you left and right for shit!

So school is shit, College is fun, university is funner. Honestly it gets better. Just keep going, you’ll find people that are your people. You won’t have many close friends but the ones you do have are priceless. Just be glad that Facebook and snapachat isn’t around and you only have your 3310 with snake to play on. And if you think MSN is bad for arguments you aint seen nothing yet, trolls are the worst, and I don’t mean those little guys with the pink sticking up hair and jewelled belly buttons.

You don’t have the best taste in boyfriends, so I don’t know how to put this to you politely, so I guess I’ll just say it. You pick utter pricks!!! Bad Boys are not cool, they’re just bad. I’ll refer back to the point about being kind to a fault and narcissists talking the piss here. You always see the good in people even when there’s not much good to be seen. Honestly Grace, please have a word with yourself. You don’t have to stay, you can leave. I know its shit when all your mates are in couples but honestly we’ve been single for 3 years now and we’re having the best time!!!!!!

I think the main bit of advice I would give you at 15 would be is talk to someone, tell someone what’s going on in your head. Speak to someone. Its not gong to be easy as you get older there will be dark times and time where you thought you couldn’t get through, where you couldn’t get out of bed, but you did. You got up pretty much every day and carried on. Everything that has happened good and bad has let you to where you are now, me writing this letter to a younger me. And even as I write it I know if I read this at 15 I probably wouldn’t pay attention to it (you still have a thing about being told what to do or advice being given to you). Typical scorpio intensely stubborn and fiercely independent. You are beautiful inside and out (yeah I know you’d cringe at that, we’re still working on receiving compliments even at 34).

Someone asked the older you (me) recently if I was happy. I could honestly answer them yes. The other bit of advice they gave me was ‘just do you. do what you want and what makes you happy. Don’t feel like you have to please everyone and be everything to everyone’ most honest bit of advice I think I could give you is that. Don’t give all of yourself to people who won’t even give you even a tiny bit of themselves. It will lead to a broken heart in relationships and friendships and it will inventully lead to a slightly broken you. But, as I said before, you are stronger than you currently know and nothing needs you down for long, a phoenix rising from the ashes (might be a decent tattoo that….)

Lastly before I leave you to carry on playing gameboy just a pre warning: 2019 may not of started off well but it turns out in-between all the sad stuff thats been going on you’ve had your best year yet, you’ve learnt a lot about yourself and the others around you and you’re still learning. You’re still a work in progress, you’re still healing but you still have plenty of room for more tattoos……

All my love my little Padawan

From An older, slightly wiser, still as stubborn you